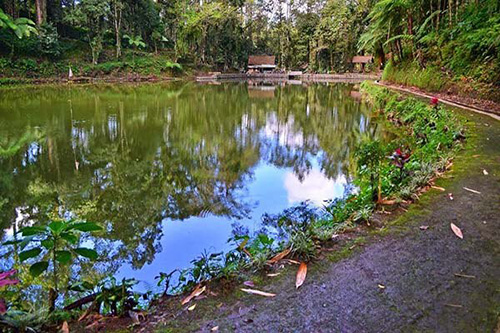 Rawa Bayu in Banyuwangi also said Rowo Bayu is a an interesting swamp located in Banyuwangi that still overgrown plants on the right and left unexploited and Protected Forest Areas. The beauty of wildlife and fauna in the marsh wind make all visitors never stop visit this swamp.

Rawa Bayu comes from the word ROWO which means “marsh” While the word BAYU is “wind” comes from the name of the village “Bayu village”. Located on state forest plot 8, Bayu village, Songgon subdistrict, Banyuwangi, East Java. The Rawa Bayu location is at an altitude of 800 meters in less more differences sea level, so the Air region very cool and fresh. The area Rawa Bayu lake about 50 meter diameter, confined with dense forests and growth of various trees. As a result, the sun rays also painstakingly make the circumstance seem noon as though the sink Sun.

Besides the searchers enjoy the beauty of Rawa Bayu, this swamp also famous with its history, reputedly said that this lake, store Blambangan History which is full of tears and blood droplets. At one one of the side, The Edge of the lake there was Petilasan King Blambangan Tawang Alun when meditated prayer contemplating his brother’s death that fought against herself.

According the communities tales, a lot of local people gathering around to Rawa Bayu Swamp every December commemorate the Anniversary of Banyuwangi or Frequently called HARJABA. As well as in this area there is a hundreds of yesrs aged tree grow up strongly, the tree is combined from the Banyan tree and Apak tree, on the middle wood have a cavity resembles a winding cave with the roots of the tree section. Beside of Rawa Bayu Swamp stand a temple building appears Sturdy Standing on the Yang Hill. According to local caretaker called the temple highlight the great white tiger. Yang Hill was established to respect the spirits of the ancestors That review has contributed to maintaining soil Blambangan hearts wind Puputan War Year 1771. That said, the area the singer first used the wind blowing War fighters hiding and regulate development of strategies against the Company.

Also there is a Singer Building provide springs, Rawa Bayu believed to be holy springs, which accommodated Inside of pool (spring). There are three springs (spring) Singer in place include:

In addition, The Rawa Bayu spring streaming also used by PU department for rice field irrigation and fields in the village of Wind and Surrounding Areas.

Rawa Bayu located about 35 km from the city center banyuwangi or 35 km from Genteng Subdistrict, to review the singer area was not difficult from Genteng village. Visitors reach by personal vehicles (cars and motorized) and passing rice fields route.

Rawa Bayu at Banyuwangi is one of the interested Beach in East Java Island that still located in Banyuwangi Tourism. Other interested places in this regency consist of Plengkung Beach that know as G-Land Beach, Rajegwesi Beach, Belawan Waterfall, Kalibaru Plantation, Baluran National Park. Not too far from Banyuwangi Harbor, there is the popular Crater in Indonesia that known as Blue Flame Ijen Crater. This Crater only reach 2 hours from Ketapang Port using a public transportation or Motorbike.

Banyuwangi is one of Indonesia Regency that consist of Various Tourism, You will find interested places such as Surfing in G-Land Coast, Turtle Observation in Sukamade Beach, Historical site in Alas Purwo, Waterfall and Mountain Trekking at Raung and Ijen Volcano and others, Your vacation will be colourful after you combine you tour with many some popular tourism around Watu Dodol Banyuwangi.